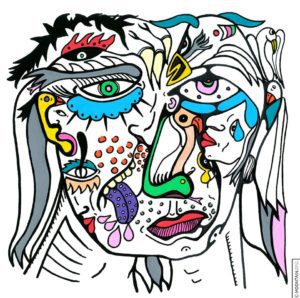 This drawing is a part of a project called “The Art Of Inclusion”, which was started by the german artist Gee Vero.

In April 2010, when World Autism Day went unnoticed in Germany, Gee conceived of The Inclusion Project. At that time, she was drawing half-faces of people. Her concept was simple. She would send prominent people half-faces to complete along with a letter explaining the project.
Her letter states: “I am inviting well known people to take a step towards inclusion together with me. I am asking them to come and meet me in their own way on my picture which will then become ours! We would be showing in art something that we are still light years away in reality: tolerance, inclusion and acceptance of autistic people are not an illusion. Even two worlds that could not be more different can exist on one common territory, not just next to each other but with one another! The Art of Inclusion grows as it goes.”
So here is the result, and i invite you to type her name on google to discover others’ works / interpretations.