THE PATH OF LIFE – Indian inks, gouache markers, on A4 canson paper, 2019 © Moontain 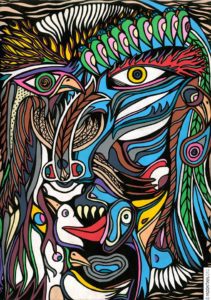 This is only an interpretation, once the artwork is done, i just observe it and discover things.

At first it may look as a big tormented face but it’s also something else.
It’s a circle but also a cycle of the sublimation of a breeze of life / light, through the nest, to the sky.

I noticed at the bottom right of the drawing, a bird with a blue head and a closed eye, as if meditating. It has like a ruffle composed of nine white feathers. Nine new entities of pure life.

Through its beak, it performs as a transfer of life that goes back (always on the right of drawing) along a long neck of another bird. A kind of stork that holds in its beak a small bag containing a kind of primordial “cell”. the essence of life ready to incarnate (since it is said that a stork brings new life).

The long neck of the imaginary stork is brown, like the branch of a tree where the sap rises. And the small packet containing the cell of life concentrating the nine original lives is deposited on a foliage (the green zone to the right of the drawing). It goes back over the right eye of the big face whose eyebrow is similar to small red (blood like) flames. These warm up the elemental soup and so can come into the world the nine birds that stand side by side at the top of the drawing.

This small band of birds looks to the left. An area where you can see yellow flames with their plume of smoke. The bird on the far right not only looks but understands what is happening, hence its yellow eye (echoing the flames). It is the one that will allow others to cross a new stage of knowledge.

Let’s continue the journey in the drawing. Here we are in the upper left. Where flames mingle with small branches. But not in a spirit of destruction, rather in the spirit of renewal. This is why a tiny little green shoot is visible in the middle of the branches. As with the birth of birds, the plant also comes and goes by the energy of the sacred fire.

All these elements make up the headdress of a large raptor that occupies the whole left part of the drawing. In all civilizations raptors are perceived as sacred because they fly at very high altitude closer to the creator. In this the one is inhabited by a wisdom that allows him to remain calm and even support or accompany this renewal, to the left of his head at the end of a sacred white feather, appears another small shoot of nature, this time of a emerald green color (whose meaning will appear later).

As a testimony of its wisdom, the wing of this great bird participates in the composition of a kind of winged larva that can be found near the ponds (which also corresponds to the nose with its two nostrils, the largest face that the drawing form). This highlights the connection between the largest and the smallest creatures, that nothing is separate from each other, that each of these entities has its relevance and the right to life.

Still on the left side along the bird, the bottom of its plumage descends as the roots of the tree (the small green lines are the reminder of the plant). These roots plunge into the original source. In these white birds echo a certain celestial purity. Also, at the bottom of the drawing, in the middle, resides this main bird and we can see that its beak plunges into a sort of constellation (the gray circles in the middle of a black zone deep as space).

At the center of this constellation is the blue color as an allegory of the universal source of life. Here you can see the light blue that echoes the first level of wisdom of the little birds on the right, as well as the emerald green that is present (remember) on the raptor’s head, which signals an even deeper level of wisdom. The white bird watches over the universal source while at the same time making sure to circulate its energy.

In the central part of the drawing, which is in fact a large face composed of the details that I have described to you previously, a big red tongue is visible, coming out of a toothed mouth whose aspect is rather threatening. She seems to want to hinder the march of the white bird, a reminder that if the cause is noble, the way is not easy so far. On top of this mouth with the red tongue, the area that corresponds to the cheekbone of the big face, is actually a feline head (with its small brown mustaches).

In the end, all this is a reminder of the constant balance we have to maintain between our instinct and our intuition. And all this along the path of life, through all its forms.