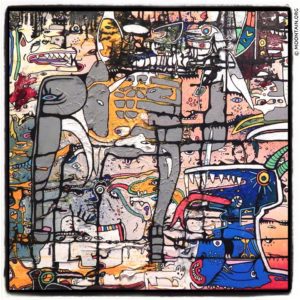 First, it’s been +2 years since i’ve worked on this painting for the last time, so today felt like meeting a friend again after not seeing him for an extended time, meaning, we had many things to tell to each other (or things to re-discover that we forgot) … i just had a nice session on it, who knows maybe 2018 will be the year i finally finish it.

Its title is SAFARISE for safari+rise, obviously this is because of the presence of animals, it is like a journey in the wild. Here, you can easily see a big elephant, one of the greatest being on the planet, one of the many we massacre directly or indirectly. But there are many other kind of entities that i’m not sure we can see through the screen since there are sometimes very small / details but everybody will be featured.

It was the first painting me and my friend Johanne collaborated on. In fact, there was this beautifully raw background in her studio the first time i met her, i immediately fell in love with it and started to work on it. I took it back home the very same day, it was back in 2014. Since then, from time to time i’ve added lines or colors here and there. Here is a detail from it, approximatively 1/4 of it.

To me it carries an idea of revolt, because like so many of us, the relationship we entertain we our environment as (human) species, is extremely revolting. The lack of actions, consciousness, empathy is something that could feel as a real torment. And so, the term ” rise ” stands for the rise of consciousness AND Nature, not to engage into a fight but to be able to show each other the truth of our existence, as well as its consequences (dramatic ones & wonderful ones).

Everything has been said about the state of our planet but way much less has been done yet. The point is not to feel guilty or to wait until everything becomes totally messed up so we can ignite the will of a change (of our habits or concerns). But rather remembering how good the Life can be when we are just looking to evolve in harmony with it. Its benefits go both ways and are free.

Utopia has never looked as much utopian as it is today … but this is all that is left to participate in a positive way to this evolution we are in. You already read it so many times, we already thought of it so many times, let’s beware that it is not the last one, so many species we used to grow up with are on the verge of disappearance … Zoos or tiny reserves are NOT a solution, you can not fake the wild, the authenticity of Life & Nature, period.

How do you feel about our behaviour, the planet’s state, the sufferings and unbalanced world we live in ….. I wonder