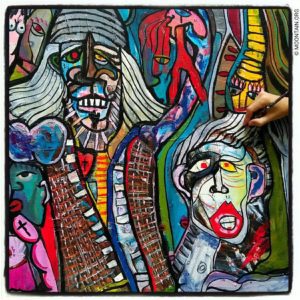 It’s pretty chaotic but i’m slowly finding a path inbetween the characters, i like working on a rough wood panel, for the most part, only using my fingers on it. It’s too early to predict its real meaning though, even if i have an idea …

Too often we get trapped by others into a dark corner. Where we are pushed to react, to argue, to fight etc … It only generates a conflict in our self and we lose so much energy, this chaos seems light-less and bringing no useful knowledge.. Then maybe the lesson would be, to get out of this situation in time.

The more i get old, the more complicated interactions with people are (and i really thought it would be easier).

I mean, not with “you” .. but people i “have to” interact with (so called art world, establishment etc).

I always believed it was a quality to have an ethic, to be loyal and always sincere, something actually needed on this planet.

But when you do that, it gets so more complicated, there are so many misunderstandings and obstacles, even with the most basic things.

So i feel this painting is echoing this period and fact, a kind of “fight” (even if i hate this word or concept) between each sides of the mind colliding.

I don’t plan to fight anyway, if something doesn’t have to come “naturally” i prefer to move on and look elsewhere, this is what we should do, there is always a better way than the one asking you to fight for it (which doesn’t mean we don’t have to work hard for it).