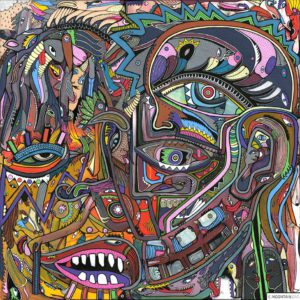 ante-scriptum:
Nature is not about competition but cooperation. You won’t create a peaceful & happy world if its foundation is this “competition” myth, where you can’t win anything because it’d mean someone else is losing.
There is another way … like in a melody, notes don’t oppose themselves but find a path to mutually sublime each other into an harmonious symbiosis.
This is what we have to look for, each single day, with each single thought, how could we harmonize our notes with others’ ones to create a melody celebrating Life itself.
Cynicism is for the weak minds but utopia asks for courage, things won’t change unless we do. So let’s be audacious & embrace a virtuous way of life *
————————————————–
Since it is a large canvas with many details & entities, i thought it would be easier to present it step by step. This focus features the central character/hero from the artwork, so this text will be mainly centered around it.

You can see his/her face in the middle/top of the picture. The tongue is out and wearing an helmet with horns on its top, maybe it is to echo the sort of battle that is going on in this chaotic landscape. You can also notice this helmet is made out of a bird (flamingo like) head, with green feathers on it. This, to imply the hero wearing the helmet has some camouflage powers and make one with Nature.

This feels like a colorful jungle from an ancient time. With a lot going on, interacting animals and demons writing their own choreography. The whole left section is forming like a big face, you can see the left eye which is a bird head (with a grey beak) and this big mouth down on the picture. You can notice a red squid above the pink lips, once again this is a nod to ancient myths (such as the horns on the hero, for pegasus and co).

So this big face is made out of many entities, another metaphoric illustration of the Whole, made possible only thanks to the interactions of details (animals, plants, imaginary creatures).

On the left and above the upper lip, you can see the arm/hand of the hero is holding something. To me it appears to be an energetic prism. This mineral scepter is to remind the power from the soil & Times, formed through millenaries of previous entities. Because we Are thanks to the ones who Were and to consider them as part of who we are only makes us better & conscious of our fragile temporality.

On the bottom right, you can see a sleeping human (in grey) … maybe he’s dreaming and all of this is his imaginary land. You can see something like a dog/wolf just above him, a kind of protector during his visions.

There are a lot of actors in this drama, i can see different kinds of birds, humans, hippos, snakes, wolves, dragons, rhinos, horses, sea monsters and more … but it’s always up to us to imagine something if we want to discover it.

All in all i wish it represents an homogeneous world where you will enjoy to get lost into.