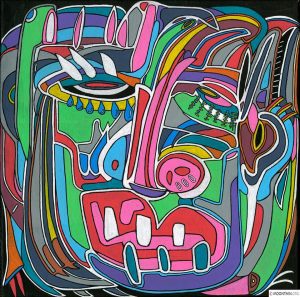 Animals in the Wild or Souls in the Whole
We all drink from the same Source *
Once again, i will attempt to just describe what this painting is about ( in my eyes ) and once again, i’m curious to read your own observation or interpretation, maybe a couple of you will write something <3 ... So, when this one was finished i did not know what to think about it. But soon after i noticed there was a side with tears while the other side seemed to feature the same number of tears, except they were "healed" (scar), trust me, it was pure luck and did not mean to paint it, i just realized it at the end. So, it became something about evolution, to transform the trial into experience, as always ... Even if this is hard, in this way, the title of the painting is the reflect of the thought, Dew, to echo the tears and Wild for their challenge, it became Dewild. The fact is, we are all subject to such journey, and difficulties, this is why it made sense to me to see all the birds, animals in the artwork, in the end, all of them formed like a face, as a reminder that we ( human / the face ) " are " .. only thanks to the wild, Nature ... not only surrounding us, but being deep part .. a full part, of our very own organism, this is why tears, are not about sadness, but the Source linking us, rolling on our face, to water the next Life's incarnation